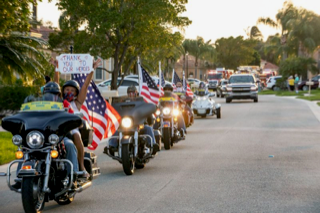 Vizcaya residents took their pots and pans out of the kitchen and into the streets of their Delray Beach community recently to make some noise. Not to be outdone, nine fire trucks, nine police cars from the Palm Beach County Sheriff’s Office, a contingent of nine cars from the community’s own citizen observer patrol brigade and others harmonized with the residents in a cacophony of noise.

The participating vehicles were organized into a lineup in the staging area of the clubhouse parking lot. The cavalcade was led by an honor guard of seven Patriot Guard Riders on their Harley Davidson motorcycles festooned with American flags.

The honorees appreciatively honked their horns, blew their sirens, revved their engines and flashed their lights as they lit up the streets like a giant pinball machine. For 40 minutes, they snaked their way past all 504 homes in the gated community off Atlantic Avenue.

Vizcaya residents in Delray Beach lined their driveways to thank their heroes during a drive-by parade. (VISUAL JASON PHOTOGRAPHY / Courtesy)

The residents said they had a desire to somehow give a significant “thank you” to those people who are keeping civilization going during the coronavirus pandemic. The question was how to do that in a safe and meaningful way.

“It was great to have the Honoring Heroes Parade last night,” resident Yvonne Stamatellos said. “Neighbors seeing each other laughing, making noises and simply being grateful to those who give their time to others unselfishly. It was a wonderful antidote to combat this past difficult period.”

Vizcaya residents made their own tributes to health care workers, police and fire personnel in their driveways. (VISUAL JASON PHOTOGRAPHY / Courtesy)

It was not only law enforcement and medical workers the community wanted to show its appreciation for, but also the postal workers, the sanitary truck operators, food industry workers, pharmacists, delivery drivers and those who work directly in Vizcaya from the gatekeepers to the gardeners to the office workers.

“It sure was great with all who participated both in the parade and in the driveways,” resident Gail Weyuker said. “A spectacular experience. Now if we could only spread all that this accomplished in our community to the rest of the country, we’d have a better world. I can’t wipe the smile off my face and in my heart.”

As much as the parade brightened up the community, so did it move the honorees. Their enthusiastic waves and bright smiles told the surface story.

“I’ve been in this business for 35 years and I’ve never seen anything like this — not even close,” said Palm Beach County Fire Rescue Battalion 4 District Chief Tony Tozzi.

To put the event together, many residents stepped forward to make signs, contribute ideas, call others, take photos and videos and take care of every aspect of the event. Vizcaya residents said they encourage other communities to find ways to say thanks to the heroes